By purchasing a product, via a link on this page, we may receive a commission, at no extra cost to you. Learn more

The Vibe Sea Ghost 130 is designed for fishing. But what you really want to know is, is it any good and will it be a good fit for what you want it for?

We’ve gone over all the main features to give you a better idea of who might get the most out of it and the types of conditions that it might excel in.

The Sea Ghost 130 is a single person sit-on-top kayak that is built with anglers in mind. This means that it’s designed to offer extra features that might be beneficial if you’re heading out on a fishing trip, such as gear tracks and rod holders.

A 13 foot kayak like this one could be better for longer journeys in open water, compared to a shorter one, as it should be quicker across the water. However, because of the length, you might find that it’s not as easy to maneuver in smaller rivers.

If you’re after a craft that can handle fast-flowing or narrower rivers, a shorter one might be better for you. But if you’re planning on packing up a lot of gear and heading out on camping trip then the Sea Ghost 130 could be a good choice.

It’s built ready to go and can be ideal for anyone new to the sport, with an included paddle and rudder system. It also has good stability. But with all the fishing features it has, it may be better suited to you if you plan to use it mostly for fishing rather than recreational paddling.

The Sea Ghost 130 Angler is a 13 foot sit-on-top fishing kayak that comes complete with a removable seat and pre-installed rudder system, as well as a paddle. It can offer great value if you’re just starting out, as it’ll let you get out on the water as soon as it arrives.

With a capacity of 550 pounds, this can be a fantastic kayak for overnight trips. You can load it up with all the fishing gear you’ll need for a day trip or pack a bunch of camping gear and head off for the weekend.

There’s plenty of space to store all your stuff, including a large cargo well at the back, with adjustable bungee cords where you can fit a crate or cooler. There’s also the large 20 inch bow hatch where you can store a sleeping bag and tent, or other fishing accessories.

The center console is great for storing smaller items and things you might need closer to hand when you’re on the water, such as lines, pliers, rope or even some snacks. As well as this, there’s a sealed hatch behind the seat that’s large enough to store a couple of dry bags and extra fishing or camping gear. Plus, both the front and rear hatches have storage bags included.

There are so many features dedicated to anglers on this vessel, making it great value and ready to use. As well as the two capped flush mounted rod holders behind the seat, there are four gear tracks for attaching extra rod holders or accessories.

In addition to this, there is a fishfinder transducer port in the center where there are also several mounting points for attaching other gadgets. The two paddle holders at the side are a good feature but a better feature is the bow paddle holder, where you can quickly store your paddle in a hurry if you need to tend to your fishing lines.

This vessel is designed for a variety of waters, meaning you can use it on the ocean, along rivers, or on the calmest lake. It’s a stable craft, even for larger paddlers, and you might find you can even stand up in it.

The good stability means it can offer extra reassurance for beginners who might be a little nervous about taking to the water. But equally it can give you the platform that you’re after when you’re trying to reel in your catch or cast your line.

Because of the length of this kayak, you’ll probably find that it glides across the water more easily than a shorter one. This can make it better for longer days on the water, as it can reduce fatigue on longer trips if there’s less work for you to do to power it.

The seat is designed to be comfortable even after several hours of paddling and fishing. It has two positions so you can adjust it to a position that’s comfortable for you. Being able to sit slightly off the deck means you stay drier and have better visibility.

Plus, if you want to change the seating at any point, the seat can easily be removed.

Being 13 feet long can be a disadvantage when you’re trying to maneuver around rocks or such but with this one there’s the added benefit of the pre-installed rudder. The rudder is foot controlled so you can use it easily while paddling. While the rudder won’t help you turn quickly, it might help guide you in the right direction while you use your paddles to turn.

The rudder is more effective for keeping the kayak tracking straight if you’re paddling in windy or rough conditions. So in this instance it should help you maneuver your vessel more effectively.

As for maneuvering the vessel on land, there are four comfort grip handles - one at either side and one each at the bow and stern. This should make it easier for taking to the water and lifting up onto a trailer or roof.

With the kayak being 13 feet long and 75 pounds, it’s not going to be the easiest thing to carry if you have to travel too far on land before you hit the water, especially if you have other gear. It also might not fit in the back of your truck as easily as a little 9 or 10 foot kayak might. 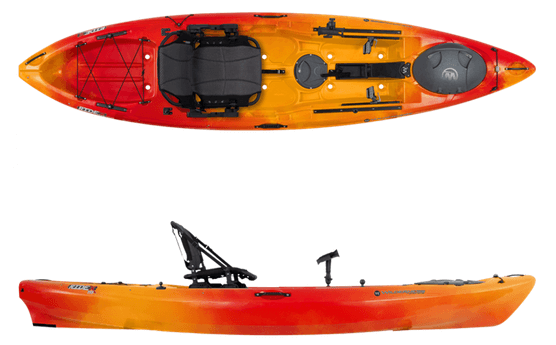 This 11 foot 6 inch kayak is 33 inches wide, offering stability. It has plenty of storage for your gear and a capacity of 500 pounds but the yak weighs more than the Sea Ghost 130, at 82 pounds.

There’s no paddle included, or rudder but there’s space to attach one. One feature it doesn’t have is built-in rod holders but there are lots of gear tracks for mounting your own.

Coming in within the same price range is the Prowler 13, which is 4 inches longer but 5 inches narrower, at just 28 inches wide. This one might be better if you’re planning on covering larger areas of water, as it should be faster.

It has rod holders and good storage options but doesn’t come with a paddle or rudder. However, there is space for a rudder to be attached. It also doesn’t have gear tracks for easily mounting accessories.

> We had more to say about the Prowler here 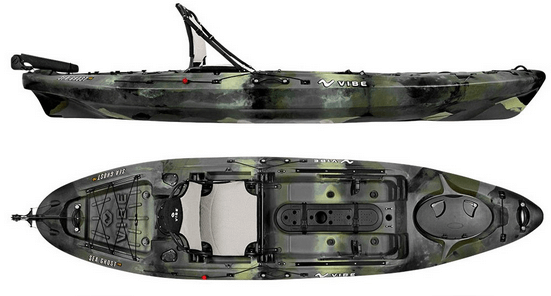 If you love all the features of the Sea Ghost 130 but you’d prefer something a little more compact, then its smaller sibling, the Sea Ghost 110 might just be what you’re after. It has all the same great fishing features, storage and has the paddle included but is just 11 feet long.

It’s also lighter, at 62 pounds and has a slightly lower capacity, at 425 pounds, but it will take up less space during transportation and storage and it comes in at a slightly lower price.

If you plan to fish, the Sea Ghost 130 can be a great kayak for the job. Whether you’re a seasoned paddler or a beginner, this vessel can give you hours of fun on the water, with enough fishing features for a successful trip.

It can give you the stability you need in a range of conditions and having the paddle and rudder included in the package can be a great start, particularly if you’re new to kayaking.

You probably now know if this will be the right craft for you but why not check it out for yourself. And if you’ve enjoyed reading about it, let us know.