Kayaking In Nebraska – Where To Go And When

Nebraska may not seem like an immediate kayaking destination, but the Cornhusker State actually has plenty of good spots for paddling. Covering portions of the Great Plains, this Midwestern state can be a great place to get out in your kayak, whether you’re a beginner or have a little more experience.

But finding the good spots may not always be easy. So that’s why we’ve put together a little guide to help you find the best places, as well as give you a better idea of when might be the best time to go. 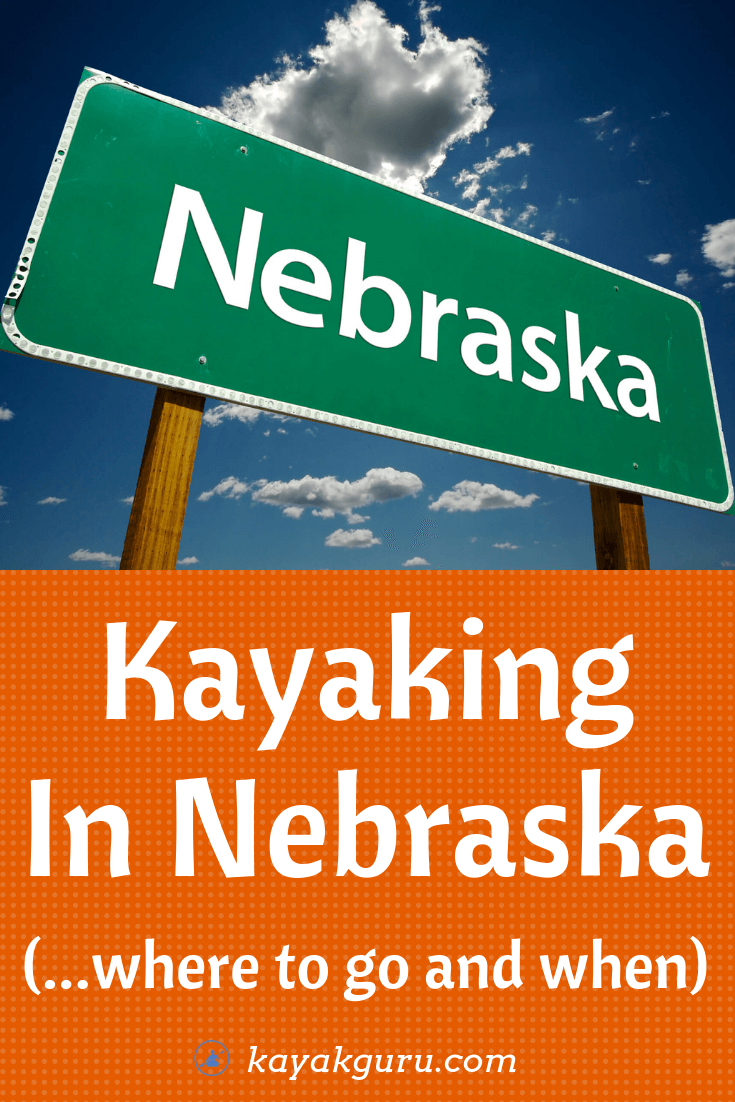 Why Go Paddling in Nebraska?

Nebraska has a varied climate, with a mixture of hot summers and cold winters, with the western half of the state being drier than the eastern half. Most of the landscape is flat or with rolling hills. This flat landscape can often result in wild weather, such as tornadoes.

With the winters often being cold, the best times for kayaking in Nebraska tend to be the spring and summer months. The rivers will often have a better flow during the spring and early summer.

> Kayaking: What to wear

However, because of the summer heat many paddling spots can be busy during the these hotter months. So either side of the summer vacation could be better if you’re looking for a more peaceful paddling experience.

Fall can also be a good time to avoid the crowds, particularly if you’re heading to paddle on the Niobrara River. The Niobrara can have a consistent flow all year round, so your paddling shouldn’t be impacted by the seasons.

> Map of where to go kayaking close to you

Located just west of North Platte, not far from the border of northeastern Colorado, Lake McConaughy is the largest reservoir in Nebraska. Known locally as Lake Mac, there are 35,700 acres of water to explore, making it a great place for a few days camping.

The lake can become busy during the summer, with people flocking to the beaches and taking part in the many water sports on offer, including parasailing, water skiing and of course, kayaking.

Lake McConaughy can be a great spot for all levels of paddlers and because of the calm waters, it can be a good place to learn. It can also be a fantastic place if you’re interested in nature, particularly birds, as there are large numbers of bald eagles.

The best time to spot the eagles is in the winter months. For other species, spring and fall can be ideal times, as these are when migrating birds will be feeding at the lake.

Fishing is popular at Lake McConaughy, with species including rainbow trout, catfish and walleye all up for grabs. There are also various fishing tournaments held throughout the summer months. Just make sure you have your fishing permit.

The Platte is a 310 mile long river that runs through Nebraska and into the Missouri River. It flows as a braided river, with many sections breaking off and rejoining the main flow, making it an interesting place to paddle.

Easily accessible from both Omaha and Lincoln, the Platte River is a slow moving river that has plenty of areas along its route where you can put in and take out your yak (or airboat!).

You can find good access to the river at Two Rivers State Recreation Area, as well as restrooms with showers. There is also a campground on the banks of the river. Schramm Park State Recreation Area can be a good choice if you’re looking to float towards the Missouri River, although some parts can be narrow and faster flowing.

There are good opportunities for spotting wildlife along the river, including pelicans and bald eagles.

The Niobrara River is a slow moving river, with parts that have been designated as Wild and Scenic by the Federal Government. There are also sections of whitewater if you’re looking for a more adventurous kayaking trip. Located near Valentine, close to the South Dakota Border, it can be a great river for families to enjoy.

The Niobrara River can be a great place for a weekend camping trip or a multi-day trip, as there are several independent campgrounds located along the river, as well as state parks. There are also towns along the way, which can make it easier to access.

You might not want to miss Smith Falls State Park, where you can see the highest waterfall in the state. There are also hiking and nature trails.

While this river can get pretty busy during the summer season, Saturdays will tend to be busier than midweek. So if you’re looking for a more relaxing trip it can be better to go during the week. Early or late in the season can also be excellent times to paddle, as it can be quieter.

As well as nature watching and relaxing paddling, it’s also possible to fish. Rainbow trout and brown trout can be found in the river, as well as other species, including green sunfish, carp, bluegill and channel catfish. So it could be a great place for a kayak fishing trip.

The Missouri River is the longest river in the USA, flowing from Montana until it reaches the Mississippi River near St. Louis, Missouri. You may already know the river for being paddled by Lewis and Clark on their famous expedition west to the Pacific coast in the early 19th century.

By paddling the Missouri River you can follow some of the route that Lewis and Clark would have followed, adding an interesting element to your kayaking trip.

Ponca State Park, west of Sioux City, can be a good base, as there are facilities for picnics and camping, as well as kayak access to the river. There are also other locations close to South Sioux City that can allow for river access and fishing.

Are There Kayak Laws For Nebraska?

●    PFDs are required for each person on any vessel, including kayaks and canoes. The PFD must be the correct size for the wearer and be US Coast Guard approved.
●    Children under 12 must wear a US Coast Guard approved PFD at all times while on any vessel.
●    Motorized Kayaks must be registered before being operated on Nebraska waters.
●   Boating Under the Influence of alcohol or drugs is against the law in Nebraska. You will be considered to be intoxicated if your blood alcohol level is 0.08% or above and you could face 6 months in jail and a fine of up to $1000. These punishments can also apply if you refuse an alcohol test.
●    Children under 14 are not allowed to operate any motorized vessel. Ages 14 to 18 must have a boating safety certificate to operate a vessel with a motor.
●    All vessels are required to carry a sponge or bilge pump on board.
●    Navigation Lights are required while boating on Nebraska waters. For kayaks, this can be a white light or flashlight.
●    A whistle is required to be carried on board a kayak in Nebraska.

While you may not have thought there were many places to kayak in Nebraska, you’ll now have discovered that there are plenty of fantastic spots for you to explore on the water.

Whether you want to follow in the footsteps of Lewis and Clark and take to the famous Missouri River, or simply prefer a more casual paddle on a scenic lake, Nebraska can be a great paddling destination. With calm lakes and rivers, lots of wildlife and interesting scenery, it can be ideal for all ages and skill levels.

If you want to encourage more people to check out Nebraska for their next paddling trip, share this article. And if you have a favorite Nebraska kayaking location, tell us about it.

Kayaking Puget Sound, Seattle
Where Are The Best Fishing Spots Near Me?
Guide To Kayaking In Arizona
Canoe vs Kayak
The Best Kayak Brands Around Today