Fishing In Peace – How To Legally Take Down A Drone

Picture this; you’re out trying to have a relaxing day on the water. You’re enjoying the outdoors and the bountiful fishing, and all of a sudden you hear an annoying buzzing sound. No, it’s not a swarm of bees. It’s someone’s drone flying overhead. And immediately your peaceful day on the lake is no longer the relaxing fishing trip you had planned.

Note: we previously covered fishing drones, so yeah, us fishing folk are guilty of "polluting" the skies. We're not against drones. If we all respect each other's privacy and solitude....there won't be a problem with them.

But wouldn’t it be great if you could somehow take these annoying drones out of the sky? We’ve looked into it and we can show you how to disable a drone but we do need to warn you; taking down a drone in the US is not legal and you could get in some serious trouble. 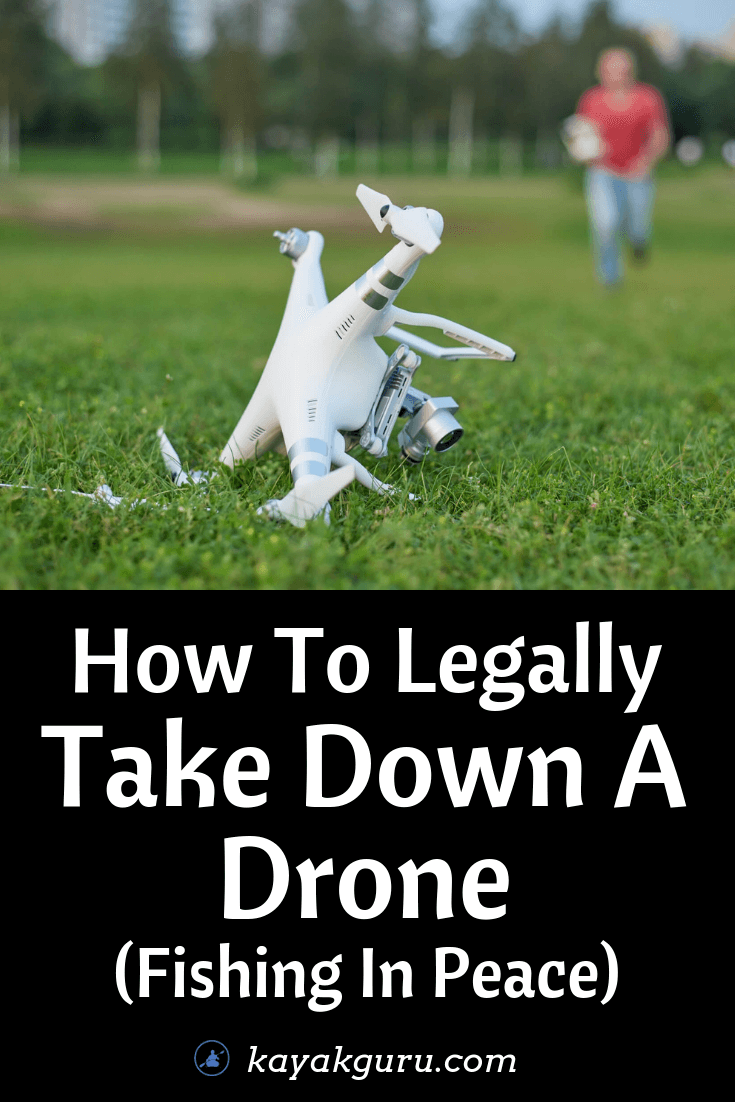 Because drones are technically regarded as aircraft, it’s illegal to take one down, just as it would be if you were to take a plane or helicopter out of the sky. With the laws from the Federal Aviation Authority, the charges for taking down a drone could be pretty hefty and could land you in jail.

Not only that, you could also get in trouble with both the state and federal police depending on how you go about attempting to sabotage a drone mid-flight. Shooting one down could result in firearms charges, reckless endangerment or criminal damage charges, among others.

How To Take Down A Drone

While it is against the law in the US to take down a drone, here are some of the ways that people have been successful in wiping out those pesky drones from the sky.

But remember, if you’re on public land, you pretty much have no rights to privacy. The best thing you can do to stay on the right side of the law would be to ask the drone operator to kindly stop. Or call the police if it’s on your property.

There are a couple of ways you can use nets to capture a drone. One way is by using a larger drone and attaching a net to it. Then scoop up the annoying one in your net and bring it to the ground, just like how the police in Tokyo, Japan are managing the illegal drone use in the city.

Another way to use nets is to use a SkyWall 100 drone catcher. This huge launcher, developed by British engineers, works by precision targeting the drone in question and firing a capsule that releases a web-like net that surrounds the offending drone. It has a parachute that releases in order to bring the drone down to the ground safely.

Shooting a drone out of the sky with a gun is definitely a dangerous risk, as you could potentially injure someone, either with the shots fired or with the falling drone.

A few years ago, in Kentucky, a man was charged for shooting down a drone that was hovering over his backyard while his daughters were sunbathing. He was initially charged with discharging a firearm within city limits and felony wanton endangerment. However, the charges were dismissed by a local judge.

But don’t let that one judge’s decision fool you into thinking it’s a good idea; it’s still illegal.

One way that you might be able to take down a drone with very few consequences is by following in the footsteps of the Dutch Police. They have been working with a company called Guard From Above in order to train eagles to catch and retrieve drones from the sky. And it seems to work.

The Eagle That Chases Drones

While this would technically probably not be illegal, as the seemingly wild bird would be snatching it and not you, it’s probably not something you’re going to be able to do, unless you’re a trained falconer with some birds of prey to hand.

However, there are concerns about the safety of the birds and studies are in place to discover if there might be any risk to the birds from the spinning blades of the drones they catch.

One way of taking out a drone is to block the signal between the controller and the drone. DroneDefender is a device that can disrupt the signal and essentially send the drone back to where it came from or gently glide to the ground.

However, these devices are not available to the public, so unless you’re a federal agent, you’ll have a pretty difficult time acquiring one.

Hacking into the WiFi signal on the drone could be another way to go, but this is also highly illegal and potentially can open your network to being hacked.

Even though there may be several ways you can in fact take down a drone, no matter how annoying it is hovering around your head, disrupting your peace, there’s no legal way you can actually do this in the US.

So if you’re on private land and you find there’s a drone invading your property or your privacy, the only thing you can really do is call the police if you feel particularly under threat.

That being said, with more and more drones entering our skies, there could be changes in the laws in the near future, but until then it’s best to leave it to the authorities.

We hope you’ve found this somewhat entertaining and if you have any experience in taking down drones, feel free to let us know. And share this with your friends if you want to help them stay on the right side of the law.

How to take down a drone?
Simple, you don’t.
Or of course if one wants to get some website traffic on its website page for some clicks, almost anything is legal.
Though in this case, taking down a drone stays illegal in the U.S. under any kind of circumstance.
Though to be really honest and straightforward.
This article is ridiculous beyond.
As a quad copter pilot and many with me never discuss nor question how to sink a kayak!
Especially those for ‘fishermen’ whom find it oh so pleasant to annoy and damage many fish for fun.
I think I made my point clear!
By the way, I did not click on any of the abundant present quad copter advertisements on your page.
Have a great weekend.
Erik.

We made it clear in the article that you cannot legally take down a drone in the U.S.

We also wanted to include interesting stories of how drones have been taken down in other parts of the world.

The display “ads” are actually under Amazon’s control, We do receive a small commission should a reader click though to Amazon and make a purchase….at no cost to the reader. These commissions help us to pay the overheads of running a website.

When your neighbor has a restraining order on him and he has the audacity to hover said drone 6 feet above my truck in my driveway with the camera point straight into my living room window, yeah, I have a problem with that. So since I can’t get him for fcc violations then can I get him because he violated his restraining order or for not having a license or both, is what I like to know.
At common law, the maxim cujus est solum ejus est usque ad coelum applied and meant that he who owns the soil owns up to the heavens. Not surprisingly, with the advent of airplanes and modern air travel, this maxim no longer applies in full force. BUT, As these passages illustrate, the United States Supreme Court did not set a magic height above which aircraft may travel and below which trespass would occur. The Court’s ruling has been synthesized in the Restatement (Second) of Torts Section 159(2), which has been relied upon by Texas appellate courts. The Restatement provides:

Fight by aircraft in the air space above the land of another is trespass, but only if, (a) it enters into the immediate reaches of the air space next to the land; and (b) it interferes substantially with the other’s use and enjoyment of his land.

The height at which an aircraft enters into the “immediate reaches” has not been clarified. The Restatement opines that flights of over 500′ are likely not within the immediate reaches, while flights of less than 50′ likely are within the immediate reaches such that a trespass action could succeed, and flights of 150′ depend on the circumstances. As the Texas Court of Appeals (14th – Houston) has explained, “most intrusions by aircraft through the atmosphere above land are privileged and do not constitute a trespass.
So someone needs to clean this mess up and get to brass tacks because I should have that right to shoot it down because under this circumstance, it was in violation of my personal well being to live in peace without invasion of privacy.

If one needs a firearm to reach the drone then the drone is too far away to really be an issue. However if the pesky rascal is within air rifle or sling shot range that would be another matter. Personally I think a wrist rocket and a bag of marbles would be great fun. White marbles give a better tracer effect to gauge trajectory.

Best 2-Person Fishing Kayak – Tandem Angling Fun!
How To Lift And Carry A Kayak (Pro Tips to Avoid Injury!)
Recommended Cars For Hauling Kayaks and Canoes (from Home to the Water)
How To Store A Kayak Properly (and NOT Damage the Hull)
Kayak Outriggers “Do It Yourself” at Home Guide